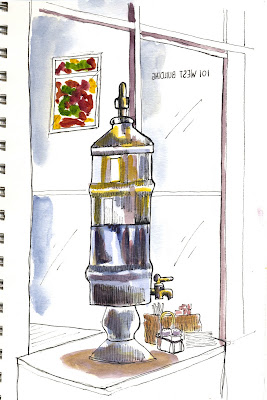 As previously stated, today was the "34th World Wide Sketchcrawl," a day where artists from all over the world gather together to record the places, events, people and things of the world, then share them online.

Because the weather was so miserable last night with freezing rain falling, we decided to cancel our scheduled outing.  Then, as Murphy's Law would predict, we had a warm wind that took most of the danger off that layer of ice by noon.  That's when LaPoynte called me and said he was at the Food Court in the mall: a destination we had originally outlined for 1-3 this afternoon.

I drove down to meet and after a nice Italian sandwich, created by the staff at Bruchi's, Dave and I decided to drive downtown Kennewick to look for greater levels of inspiration.

This water decanter sits just inside the window at the Kennewick Coffee Company where, along side a 16oz. vanilla latte, I decided it was going to be mine to capture.  We had a good time while there, talking to Ron Weed, a man who has been to Oaxaca, and back.
Posted by Jim Bumgarner at 6:16 PM

Glad you guys got out today. And HAPPY BIRTHDAY!!!

Care To Join Us?

Do I Have to Blog Everyday?

No. Though it's a good thing, a fun thing, and highly encouraged at least now and again. Some participation lets us know you are on board, inspires others and may be used to determine eligibility for inclusion in a show (if we have one).

Do I Make Art Everyday?

Yes. That is the commitment.

It is very loose; however diligence is expected because that's what makes it expansive -for you. That is, you commit yourself in whatever fashion you can to "doing" art every day. Add to your piece each day or create something new, it’s up to you. It might mean folding a paper napkin while you are on an airplane flying across the globe because that's all you could do that day - but it was intentional.

Still have questions or want to join the challenge? Don't hesitate to ask - you can add a comment to one of my posts.

These people can't get enough of Art-a-Day